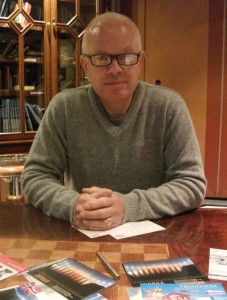 I am an economic historian with a long-standing interest in language and translation, now living on the Herefordshire-Worcestershire border near Malvern.  As a Senior Research Fellow in History at the University of Tartu I will for the next five years be working mainly on a new project, studying conceptions of change in  the economic literature of early modern England.

Born in London, I first went to school in Wilhelmshaven, where I lived for three years in the mid-1950s.  Later when I was at Essex University my parents were living in (West) Berlin, where I worked in Smuts Barracks, right next to Spandau Prison, during vacations.  I taught myself German, and partly French (building upon a very moderate O level), and somehow parlayed this in the course of the 1970s into work as an academic translator.

This was also the time that my real interest in economics developed, while a graduate student in Social and Political Sciences at Cambridge.  Fortunate to get any job at all in the later 1970s, I was at Keele University from 1976 to 2002, first teaching sociology, and then economics.  My postdoctoral work in Heidelberg and Göttingen, stretching over the period 1979-85, re-educated me as a historian, and coincided with a developing interest in the work of Max Weber.

Given that my interests range across the social and human sciences, I hope to use this website to draw these interests together, and make sense of them in a more coherent way than is usually possible through individual essays, books, seminar presentations and lectures. A selection of my published work can however be found on my academia.edu page.