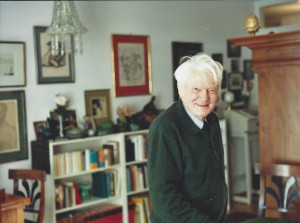 This is Wilhelm Hennis in his Freiburg flat in 2005.  The way that Hennis took up an interest in the work of Max Weber towards the end of a long and eventful academic career – deftly outlined in Stephan Schlak’s Wilhelm Hennis (2008) – gave me a scholarly role model for a graceful yet committed old age.

I was very fortunate to be shown the manuscript of Hennis’s first major essay on Max Weber in 1982, at a time when I was becoming increasingly interested in the work of Weber.  I was translations editor for the journal Economy and Society, and was quickly able to translate and publish Hennis’s brilliant analysis of Weber’s Fragestellung – the intellectual framework that oriented all his thinking.  Over the next two decades, my engagement with the writings of Max Weber was guided by my translations of Hennis’s own writing.

Hennis was a political scientist, and I am an economic historian, and so there was a difference of emphasis in our approach.  But two of the diagnostic qualities in Weber upon which Hennis laid emphasis – Augenmaß and Urteilskraft, sober appraisal and judgement – serve as watchwords for any scholarly activity.

Given my own transition from a student of sociology to a teacher of economics, I was always irked by the lazy assumption that Max Weber was a “classical sociologist”, because that was the way in which he had been packaged for an Anglo-American readership through the translations of Parsons, Shils and others.  One particular thread in my interest has been to recover the sense in which Weber was an economist, something which he professed almost to the end of his life, and which is in particular reflected in the monumental handbook he edited, the Grundriss der Sozialökonomik, a multi-author account of modern capitalism.

His final text, Economy and Society, was drafted to form part of this work, but only the first three main chapters were completed – on the “basic concepts of sociology”, the “sociological categories of economic action”, and “types of rule”.  These three chapters form a rigorous foundation for social, economic and political analysis, but their natural connection has rarely been explored.  My new translation of Economy and Society for Harvard University Press was published in April 2019, and I hope that through this work future readers will be able to discern the originality in Weber that Hennis first revealed to me thirty years ago.