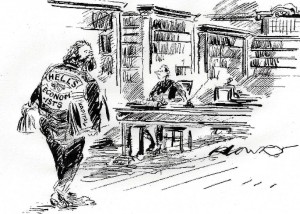 I went to Essex University intending to study economics because Lipsey was there, and I had used his textbook studying for A level during 1967-68 – my school did not teach the subject so I took myself off to evening classes in Kingston.  At Essex there was a common first year in Social Studies: Mike Parkin gave most of the economics lectures, Peter Townsend those on sociology, and Jean Blondel those on politics.  My sociology class teacher was Colin Bell; we were the first group he had ever taught, he was fresh from the Banbury restudy and his dynamism and engagement were catching.  My economics classes turned out to prefigure the modern idiom: we were run through exercises by a graduate student whose name and face I do not recall.  I switched to sociology in my second year.

The teaching of undergraduate sociology at Essex was very broadly-based, and relatively light on classical theory.  So I read Lévi-Strauss and Marcel Mauss, but not really Durkheim; I had a copy of Max Weber’s Theory of Social and Economic Organization but I don’t think I ever opened it.  I did however read a lot of Marx, and in my final year discovered Althusser.  During my final year I took a course in the history of sociology; writing an essay on Malthus, I concluded that political economy was part of this history, and that this was something I wanted to study.

My original conviction that economic ideas and analysis were central to the understanding of the modern world was consequently inflected through the study of the history of economic argument.  Given the disarray of modern economics, where the challenges appeared merely technical and not intellectual, I turned to the reconstruction of political economy.  In this way, I thought, a new perspective might be gained on the way that economic thinking had become so dominant a force, yet so limited in its forms of argument.

Having spent the autumn and winter of 1971-72 in Germany, I arrived at Cambridge in October 1972 armed with copies of Marx’s Werke, and proceeded to read through them.  In my second year Maurice Dobb agreed to supervise me.  I drafted a revisionist critique of the the historiography of the industrial revolution, shifting my attention as a result to the development of agrarian capitalism in England; then wrote up my thesis as a narrative of the development of capitalist agriculture on the one hand, and the centrality of rent to the Ricardian theory of distribution on the other.

During 1977 I rewrote the theoretical half of my thesis as Land, Labour and Economic Discourse (1978), and then began collaboration with Athar Hussain on a study of the politics and economics of the agrarian question in the later nineteenth century, as reflected in German and Russian social democracy.  The issues of market and plan that that the twists and turns of Soviet agrarian policy during the 1920s threw up sparked an interest in the kind of economics Soviet administrators would have learned, and it was this issue that took me to Heidelberg in 1979 to study German economics.

Eventually, after a move to the Max Planck Institut für Geschichte in Göttingen, I ended up studying the development of Cameralism in eighteenth-century German universities, parallel to which I collaborated with Istvan Hont at the King’s College Research Centre in the organisation of an international research project on the institutionalisation of economics.  Common to both projects was a conviction that, if we wished to nail down the economic presuppositions and blind spots of any era, then the place to start was the way in which individuals had first encountered economic argument, and the kind of economic thinking inculcated in them.

This idea was pursued from the later 1980s by studying the development of the discipline of economics between the mid-nineteenth and the mid-twentieth centuries.  Also called for here was a reconstruction of the history of the modern research university and the path it had taken in Britain, usable and reliable modern studies of the evolution of the British education system, whether primary, secondary or tertiary, being virtually non-existent.  I gained a clear insight into the various misconceptions about education, learning and employment that directed the reorganisation of higher education during the 1990s, and the unthinking damage wrought by reformers lacking adequate knowledge of the object of their reforms.  Some of the research done during the 1990s was written up and published, but the intention to pull this together as a book was then shelved, more or less in despair.  Instead, I turned to developing my interest in the work of Max Weber – who did, after all, have something useful to say about the relationship between modernity and bureaucratisation.

After 2002, when I left Keele University, much of my time was taken up with coaching and translation, and the most important continuous thread was this growing involvement with the work of Max Weber.  However, by 2010 I had conceived a book project that would reflect upon the relationship of language, history and economics, and thanks to a two-month stay at SCAS in Uppsala in the autumn of 2012 I was able to draft enough to form the basis of a new book, The Economy of the Word.  Here I make arguments about method and historiography through case studies of the writings of Adam Smith, Karl Marx and Léon Walras, together with a long introductory essay on the shifting conceptualisation of “economy” from the Greeks to the neo-classicism of the 1930s.  This is a book on “methodology” that argues against the imposition of any one method, however fashionable, but instead seeks to redirect attention to economic argument as a particular organisation of language.

The deaths of Wilhelm Hennis in November 2012, who I was able to visit in on my way back from Sweden to England in late October, and of Istvan Hont in March 2013, took from me the two friends on whom I had long relied for criticism and advice.  The death of Istvan made clear to me that one does not necessarily live into a comfortable old age – Hennis died just short of 90, Istvan in his late 60s – and that choices had to be made.  I retired from my career as a rowing coach, and was able to develop what I had roughed out in Uppsala into Economy of the Word.  My intention was then to spend several years developing my understanding of the sources of welfare economics, and the related construction of an administrative apparatus addressed to the welfare of citizens.  I found the time to complete my translation of Weber’s Economy and Society, and then, thanks to a Fellowship at SCAS during the academic year 2017-2018, I resumed work on the earlier work on the formation of the discipline of economics.  The pandemic lockdown in 2020 turned out to be the ideal opportunity for drawing this to a conclusion: Constructing Economic Science  will be published in 2021, almost 35 years after its conception.

But the idea of rewriting the history of welfare economics now seems to me a bleak prospect for my 70s, perhaps if I am lucky my 80s: no matter my interest in the issues and material, or their significance, in an HET context it feels too much like pushing water uphill.  Instead, I am treading a path back to the study of early modern and medieval Europe.  This is much more congenial material in which to immerse myself.  As a postgraduate student in Cambridge during the 1970s, I had first wanted to study arguments about land and property in sixteenth and seventeenth-century England, at the time conceived as the transition from feudalism to capitalism.  Now, with a broader interest in language and historiography, I want to go back to those older ideas and think about them again.  And here Max Weber will be a constant resource.