Yesterday Roger Backhouse and I sent off to the publisher the files of the book we have been working on since last autumn, The History of Economics. A Course for Students and Teachers.  As with the book that I edited with Pat Hudson and published last year, The Contradictions of Capital in the Twenty-First Century, Agenda will quickly turn these files into a well-produced book and publish it in October this year.  Conceived around this time last year, the book itself was written alongside our teaching the HET course to third-year economics undergraduates at the University of Birmingham, a course of twenty two-hour lectures covering a period from the later seventeenth century to the present day.  Our plan was to convert our lecture presentations into a written form as a template for the teaching of the history of economics.  This seemed quite a manageable task alongside all our other work, but it turned out to be more demanding than we had anticipated.  Nonetheless, this was itself instructive.

The History of Economic Thought mostly disappeared from its former home, the undergraduate economics degree, by the later 1970s.  Since that time no-one could hold out much hope of being hired in an economics department in Britain or the USA on the strength of expertise in the history of economics.  Terence Hutchison had become Mitsui Professor in Birmingham in 1956 mainly on the strength of work in the history and methodology of economics.  At the time, the Department of Economics was, with Nottingham, one of the strongholds of mathematical economics in Britain; even then, the idea that a Professor might be appointed on the strength of historical expertise met with resistance.

Criticism of the limitations of economics teaching in universities predated the Financial Crisis, its insistence on the esoteric at the expense of the blindingly obvious reflecting the institutional dynamics of career structures and research funding that have, if anything, since become more acute.  But in the wake of the Crisis it became more common in the media to advocate the reintroduction of economic history and the history of economic thought, if only to provide students with some wider perspective than the imperatives of the immediate present.  Besides the predictable resistance of the established profession, two problems stood in the way of this project: who would teach it? What would they teach?

Since hardly anyone has been able to make a living teaching the history of economic thought over the last forty years, the present stock of specialists is sharply divided between the remnants of an older generation (like Roger and myself) and a younger generation typically in their 20s or early 30s.  This is not so obvious in Britain, but very obvious in France, Italy, Australia and the USA.  it would be the younger generation who could teach courses, but since many had not themselves ever been taught such a course they lacked an accessible point from which to begin.

Which brings us to the purpose of our book: to provide a practical template for such teaching.  it is not a textbook, in the sense of providing a comprehensive overview of a field.  I think of it as a “coursebook”, a guide to structure and materials in approaching the history of economic thought of the kind that lectures seek to convey.  In presentation it mimics the lecture format: it is a sequence of twenty-four lectures, each of which begins with aims, a chronology, an annotated bibliographic guide, before presenting an outline of the material and concluding with questions for discussion.  It is assertive: it seeks above all to present a defensible account, but does not become entangled in defending the way in which this account is put together.  The purpose of lectures is to provide a point of entry to a subject, not deal exhaustively with it; our book has the same aim.  At the same time, it has a larger purpose: to provide a framework around which novice lecturers might construct new courses.

Until I began teaching on the Birmingham course in 2005 I had never had the opportunity to teach the subject, although this had long been my main interest.  Putting together my first lectures on Smith to Keynes I was pleasantly surprised to find that, over the previous thirty years, I had covered enough of the material to be able to make a course work.  During the past few years, where I have been responsible for teaching the period up to 1900, what was originally a series of topics has become developed into a story about the European dimension of the history of political economy.  What originally appeared to be predominantly a British story has now been rewritten in a European framework that, in the course of the nineteenth century, extends to the USA.  And so what began as a course of lectures in a British university has been revised and corrected into a story about political economy as a broadly European discourse, since the later seventeenth century at the latest. 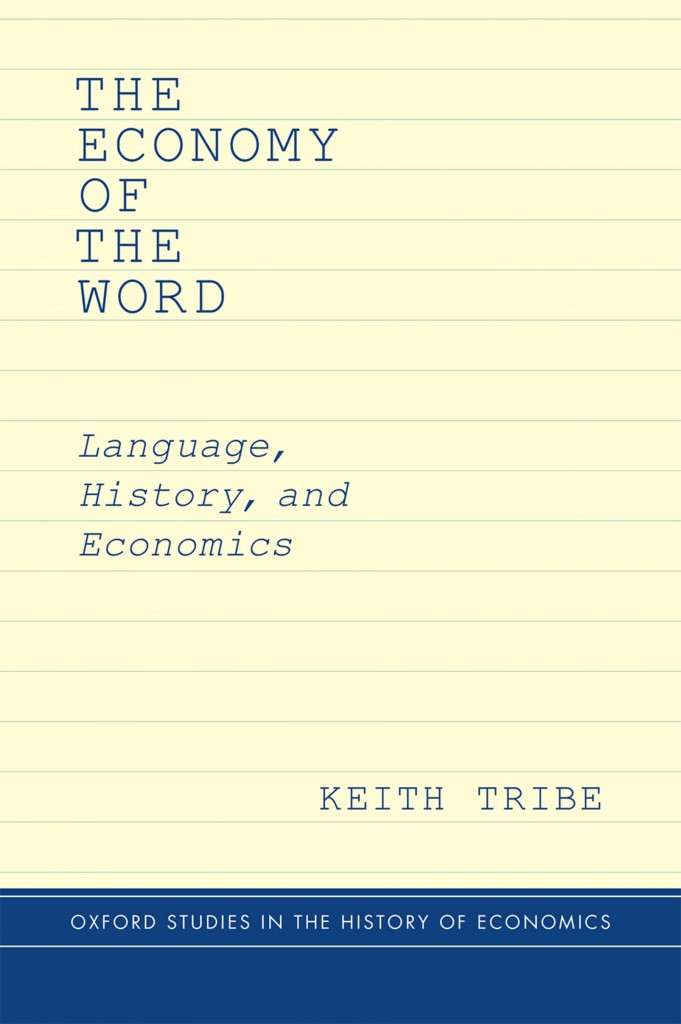 “There is an algebra of language far more wonderful than the algebra of mathematics” (Max Müller, “No Language without Reason – No Reason without Language”, Nature Vol. 36 No. 924 14 July 1887 p. 251)

In my new book I argue that the proper object of the “history of economic thought” is the analysis of economic language; and that, therefore, this should be conceived primarily as a philological practice.  While the “economy of the word” can be read as an enterprise addressed to verbal rather than mathematical representations of economic argument, it is also another way of describing the object of philological studies: the organisation and arrangement of language.  Placed together, these two ideas shape the book: that “economy” has a range of historical and contemporary meanings, and that exploration of these meanings requires that we pay attention to the organisation of language, and the production of meaning through such organisation.

This orientation to economics and to language is sketched out in the first and last chapters.  The remainder of the book seeks to demonstrate the results gained by adopting such a stance: examining the shifts in meaning of “economy” over two and a half millennia; the work involved in transforming the concept of “national dividend” into a number now known as GDP; Adam Smith’s treatment of international trade in his Wealth of Nations; the transformation of Smith’s writings into the object of modern scholarship via the “Adam Smith Problem”; the manner in which Karl Marx first encountered political economy and how this encounter shaped Capital Vol. I; and exactly where “Walrasian Economics” comes from.  Throughout, there is is an interest in the way in which texts are constructed – physically, as books; conceptually, as arguments placed in relation to prior sources, seeking the manner in which these sources are preserved, displaced, transformed, rearranged, possibly merely repeated.  By treating this as a complex process of linguistic recovery and repetition it is possible to show quite how we might read texts “in context”, hence the emphasis upon philological scholarship.

Philology went out of fashion in the early twentieth century, and became treated as a superseded antiquarianism.  James Turner’s argument that philological studies actually transmuted into the modern humanities (Philology, Princeton UP 2014) does have elements both of overreach and occlusion; but this has, predictably, been met with the kind of condescension that academics reserve for antiquarians and amateurs (Colin Burrow reviewing Turner in London Review of Books 6 November 2014).  It would be more fitting to recognise that much of the past fifty years of “criticism” (from Foucault, through Derrida and Baudrillard, to Moretti) has done rather less than is generally supposed to advance our understanding beyond positions already established more that one hundred years ago:

Philology seeks to ascertain the fundamental forms and most general expressions of thought which recur in the grammars of all languages, and investigates the laws of the development of language as illustrated by literatures, and thus on its objective side becomes a means of throwing light on historical science. (J. Scot Henderson, reviewing Conrad Hermann, Die Sprachwissenschaft nach ihrem Zusammenhange mit Logik, menschlicher Geistesbildung und Philosophie (1875) in Mind Vol. 1 No. 2 (1876) p. 261)

This captures the basis of philological work, language as text, displaced in the early twentieth century by a new linguistics that re-directed attention to the structure of contemporary speech rather than the historical sources of contemporary language use; a modern linguistics whose elementary building blocks were commandeered by cultural critics who then used them to read the world as “text”.  It is time to go back to the historical sources of language.

As I outline in my concluding chapter, “knowledge”, both formal and informal, has since the 1970s been reconceived as “social practice”: however, the “linguistic turn” never did pay much attention to language as such, treating it primarily as a reflection of social practice.  I argue that, in the domain of the histories of the sciences, of formalised, organised knowledge, the emphasis on mode of organisation has come to obscure what it was that was organised.  I note that between the “why” and the “what” of language, the latter lost out to the former.  But, it turns out, Hermann got here first:

Besides tracing the way in which language has come to be what it is now, as a historical or natural product, it is necessary to inquire into the actual contents or the what of Language, so far as it is the revelation or outward expression of the inner principles of the human intelligence.  It has been one of the most misleading errors of modern times to deal with thought and language as if they were mutually independent of and altogether distinct and separate from each other. (J. Scot Henderson, idem.)

Mind was the first academic journal to begin regular publication in Britain.  Philosophy is today a very restricted version of what that journal then represented.  The title would translate into German as Geist.  And in its early volumes we encounter psychology, the study of language, moral philosophy, education and epistemology all on an equal footing.  In turn these formed part of the moral sciences; and, as such, part of the history of economics.